Over the past two weeks I’ve been texturing walls…lots of walls.  I’m trying to stay away from repeating texture tiles typically used in video games.  These are relatively quick to implement, but they have “that look”.

I’ve opted to paint each wall,  I feel this will preserve more of a hand crafted nature of the temple and allows me to stay true to the original block placement (at least those documented).  The downside to this approach, is that it’s some what tedious, and a little more time consuming.   File size could become an issue when dealing with larger 4k textures.  The largest file sizes I have so far are around 14 mb for a 4K exterior wall. Because the dimensions are quite large, I’ve tested converting the original png to a mid range jpeg without noticeable loss in quality, and the file size is significantly smaller….around 2 mb.  Once all the textures are finished I’ll do a batch conversion on the main texture folder. 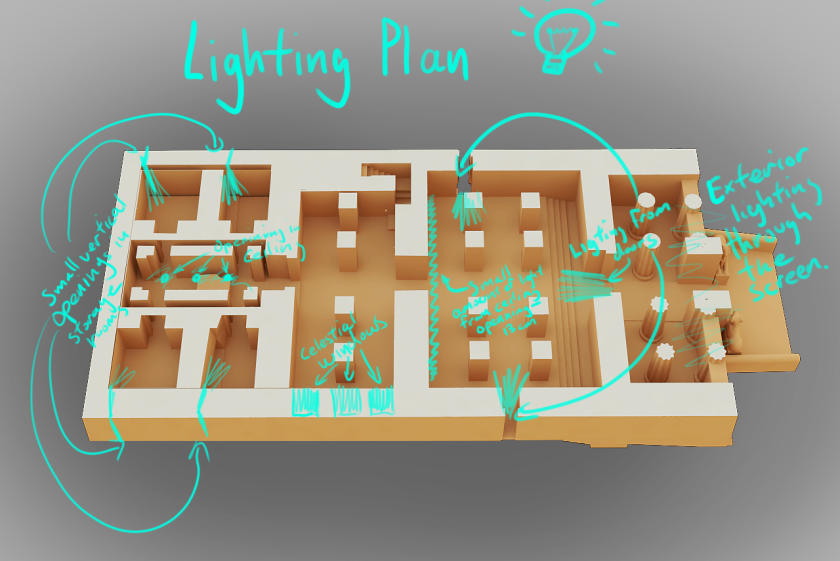 Lighting still poses some questions.   Ranke suggested several ways of allowing natural light into the space.  In the 1st pillar hall the main door would allow light to stream in.  He believed there was a 13cm gap in the ceiling slabs at the back of the room to allow the darker areas to be illuminated.  I added in a row of celestial windows to the 2nd pillar hall.

These could only be placed on the north side of this hall, the south side needed allowances for the stairs to the roof.  The 4 storage rooms in the sanctuary had narrow vertical slits in the exterior wall that allowed light to enter.  I’m having trouble finding additional means of illumination.  Were there oil lamps or some kind?

I’ve added two waterspouts to the upper north and south corners of the temple.  These are based on the spouts found at Dendera. The roofs had small openings at the rear of the temple to allow excessive water to drain off.  I wonder if the roof was slightly slanted to direct the water towards the back of the the temple?

I noticed that there are some hieroglyphs on the bottom portion of the spout at Dendera, but they’re a little hard to make out because of the resolution of the various images I’ve sourced.  If anyone has higher resolution images of this, it would be of great help.

low resolution (about 3000 quads) after Zbrush

The above is a time-lapse of the sculpt I did for the lion portion of the spot. Hopefully there will be time to go back and update the a few of the proportions of the lion. The lion and base were brought into Substance Painter for detailing.

I was immersed into the world of virtual archeology for my Masters Research Project at Ryerson University.  The focus of this project was the digital reconstruction of the el-Hibeh temple in Egypt.  After four months I believe I was able to demonstrate the potential this medium has to offer as a way of bridging the past and present. View all posts by Kris Howald